B-boys from four continents position themselves at Tanz im August. What divides them, what unites them?

What do Mourad Merzouki, Bruno Beltrão und Nick Power stand for? Clearly each one of them embodies the art of choreographically refining the headspins, backspins, footwork and other elements of breakdance. But in this do they represent three different generations or one, individual continents or a shared world?

Mourad Merzouki is 45 years old today, Bruno Beltrão 38 and Nick Power a few years younger than his Brazilian colleague. Each man came to hip-hop in his own way, each through the means of his time. The differences in age are minor but decisive. The meeting of the three at Tanz im August now shows how rapid media development played a decisive role in the spread of hip-hop: for the first time a dance culture isn’t circulated via dance schools but through the media, and on a worldwide scale. So the history of hip-hop is also one of the confluence of screens and choreographic creativity.

Curse and blessing on TV

We’re in the 1980s. Mourad Merzouki and his friends, among them a certain Kader Attou, who today, like Merzouki, directs a French Centre choréographique national, are growing up in Saint-Priest, a banlieue of Lyon, where a youth worker admits them into his circus school. They dream of attending the state circus academy. And they love the popular entertainment programme on TF1, hosted by Patrick Sabatier. One day he introduces Michel Sardou, the chanson legend, and immediately after, to the surprise and excitement of the kids of Saint-Priest, their circus teacher. Here as a representative of the ordinary citizen who has done something special and therefore justifies the show’s title, “Tous à la une”, which more or less means “Everyone on the Front Page!” But the excitement turns into dismay: when the curtain opens and the children of Saint-Priest perform their tricks, it’s only François, Patrick or Marie up there on the stage; the Mourads, Kaders or Mohammeds hadn’t been invited. At around about the same time, in 1984, the first black presenter and DJ appears on TF1, and becomes a legend with a show made up of a dance course and a concert. He still calls himself Sidney, and even though “H.I.P.-H.O.P.” was only broadcast for a single season, it ensured that throughout the country the youth of the banlieues were learning smurf, locking, popping, breakdance and so on. Following the trauma of “Tous à la une” the two sons of immigrants give up their dream of a circus career. It’s clear to them that they live in a divided society, and they decide to express themselves through breakdance. In 1989 Merzouki, Attou and some friends found their first hip-hop company, Accrorap. But it’s only when they dance for children in a refugee camp during the war in Bosnia that they grasp the potential in their dance, and realise how much positive energy can be passed on through hip-hop. In 1996 Merzouki leaves Accrorap and founds his own ensemble, Compagnie Käfig.

In “Pixel” he builds bridges between hip-hop, digital art, virtual worlds and a new variety of urban culture.

Attou and Merzouki remain friends, but they only come back together professionally as the choreographers of “Danser Casa”, a piece with b-boys from Casablanca in Morocco. For b-boying has found its way there too via YouTube, as it has to the rest of the world’s cities. And so Merzouki points the way in each of his pieces. In “Pixel” he builds bridges between hip-hop, digital art, virtual worlds and a new variety of urban culture. Dancers and acrobats have to assert themselves on a stage where virtual wholes are constantly opening up and animations always pulling the ground from beneath their feet. These animations are the work of media artists Adrien Mondot and Claire Bardainne, who combine interactive installations with dance and new circus. Adrien Mondot is known in his own right as the inventor of virtual juggling, a combination of circus art and interactive visual worlds. “Pixel” is Merzouki’s biggest hit with audiences since “Récital”, which caused a sensation with several hundred performances worldwide, upgrading hip-hop to a choreographic art form in 1996. From this point there were officially two spheres in hip-hop: that of the show dance and that of the battles and rituals in a circle.

The social component that in France is inextricably linked to dance from the banlieues also includes the exporting of choreographic competence, particularly in hip-hop and new circus. Choreographers like Aurélien Bory, Abou Lagraa and indeed Mourad Merzouki regularly approach artistes or b-boys who dance on the street in other continents, where they develop a strong technique but are unable to gain experience in collective and choreographic work. 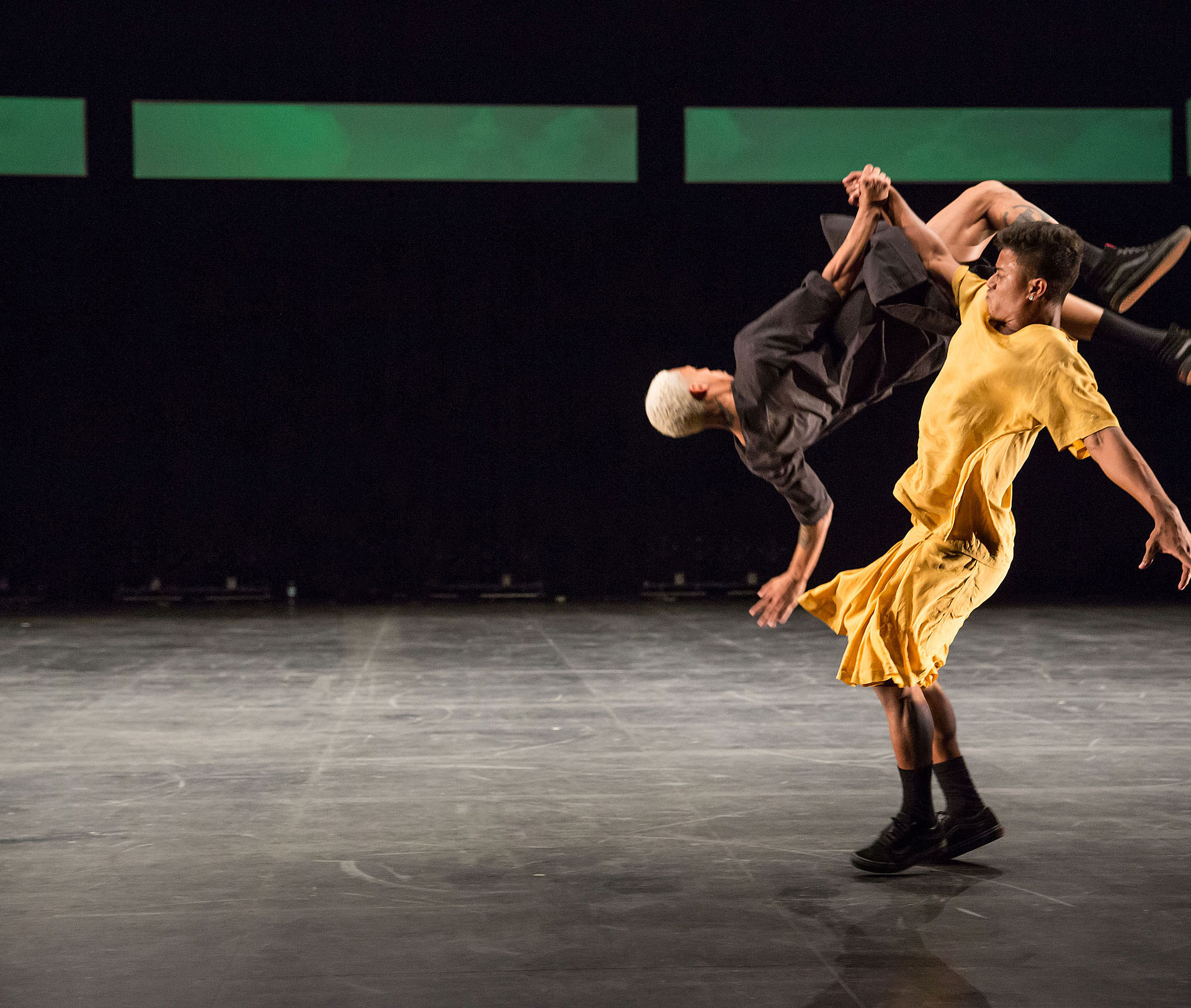 His deconstruction of the b-boy aesthetic transformed the body of the breaker into restless silhouettes, thus questioning their everyday justification.

The ‘Merzoukis’ of the global community of urban cultures have a mission to take the hip-hop of these peripheries onto a new level and turn the spotlight onto the talent of the breakers there. In 2008 Mourad Merzouki gathered together ten b-boys from the favelas of Rio de Janeiro who had never experienced the procedure of collective rehearsal and goal-driven work. It wasn’t easy for them, but they created “Agwa”, a very vital, concentrated and structured thirty-minute piece that justified all the effort. Since then Merzouki has passed on two pieces from his repertoire to the breakers from Rio, and in 2017 he went to Columbia, where he reinterpreted his classic “Récital” for the street dancers there.

Merzouki was sixteen years old when he founded Accrorap with Attou and friends. Bruno Beltrão was also this age when he initiated his Grupo de Rua with his friend Rodrigo Bernardi in Niterói, a suburb of Rio de Janeiro. His troupe, under its full name of Grupo de Rua de Niterói, was at first purely a battle squad, before Beltrão began to develop choreographic ambitions in 2000. This didn’t need the impetus of collaboration with European choreographers. Dance culture had long been disseminated via the internet. And of course Beltrão had first discovered the hip-hop scene through videos, at a time when hip-hop was establishing itself as an auteur dance. The fact that Beltrão initially wanted to create animation films in 3D predisposed him to the new media, and it also helped him to reinterpret and reimagine the b-boys – similarly to Merce Cunningham’s contemporaneous use of the animation programme “Life Forms” to develop new relationships between body, balance and gravity. And while French hip-hop choreographers were realising increasingly abstract and artistically open stage concepts, Beltrão continued to root his research in the social reality of the favelas, despite his stylistic evolution. With “H2” and “H3” he established himself as a leading innovator of the genre. His deconstruction of the b-boy aesthetic transformed the body of the breaker into restless silhouettes, thus questioning their everyday justification.

Meanwhile, social media appeared on the scene, and the video platforms on the internet outgrew their role as distribution vectors for dance cultures developed on the street. New generations of young people create new urban forms, such as jumpstyle, which was conceived directly for video forums: the so-called post-internet dances. In 2013 Beltrão took up this theme in “CRACKz”, for which he instructed his interpreters to collect their material on YouTube and Vimeo, thus giving up a part of his style, which had even brought him a New York Bessie Award. Moreover, by telling his dancers to continually look for new material he constructed “CRACKz” as a permanently incomplete, continually changing work. But after its first performances the critics bawled him out; a later revival of the piece did little to help. By Beltrão’s standards, “CRACKz” didn’t tour much.

For “INOAH” he returned to developing the piece through improvisation, and to the impressive precision, flips and running in curves from which you can even see in him a kind of Anne Teresa de Keersmaeker of hip-hop. In the language of the Tupi, ‘inoah’ means ‘high grasses’, and it’s also the name of the urban district near Niterói where Beltrão developed the piece with ten dancers. The subject matter here isn’t the living conditions of the favelas, but the deprivations and dangers to which migrants are subject. On stage this spectacularly explodes in acrobatic, almost combative figures testifying to an unconditional will to survive.

Nick Power: after Sydney without Sidney

The young Australian Nick Power’s first contact with movement was identical with that of Beltrão: “A friend from Melbourne showed me videos of Ice Cube, Public Enemy and more, and a graffiti magazine.” But there couldn’t be a more distant periphery of the hip-hop galaxy than a small town on the fifth continent. “I come from a regional town called Toowoomba, and I got into hip-hop in the early 1990s. I learned to break by getting old school videos from b-boys in Brisbane. It was the most incredible dance form I had ever seen. But I was the only b-boy in my home town.” Power breaks as tirelessly as any b-boy in the world, “in companies making street-theatre hip-hop shows”. But they aren’t ambitious enough for him: “I was desperate to make my own work. In Australia there were no choreographers taking hip-hop into theatres and to a contemporary form.” A grant from the Australia Council for the Arts brought the decisive change. In 2012 Power spent three months in and around Paris. “It’s the centre of art-style hip-hop in the world, and it has those huge battles! This was the first time I could stop worrying about money, stop giving workshops and all the hustle. I battled, I trained and I could really think about my dance.”

The show is about his and Lim’s coming together, with the battle creating the connection.

There are apparently still encounters and free zones that don’t whoosh into the living room via the internet, and can only be experienced on site. In Paris, Power met the hip-hop choreographer Anne Nguyen, one of the most high-profile representatives of the new generation. “She was very open and helpful. I went to her rehearsals, and joined the company on tour. She taught a lot to me. This really changed my way of thinking about dance. I could also attend a lot of shows and conventions. I walked away really knowing what I wanted to create.”

And that was “Cypher”, a piece about the b-boy ritual in the circle. This is now followed by “Between Tiny Cities”, a duet between Aaron Lim, from Darwin, and Erak Mith, from Phnom Penh, which practically unites two continents. “I met Aaron Lim, who had a company called D-City Rockers, and we got connected with Tinytoones, which is a hip-hop organisation in the impoverished parts of Phnom Penh. This is a school for hip-hop, but also for grammar, mathematics and so on. It has over 100 students who otherwise wouldn’t have access to school. Erak Mith is a dance teacher at Tinytoones who before was himself a student of this school. The show is about his and Lim’s coming together, with the battle creating the connection. It’s the result of three years of cross-cultural exchange between D-City Rockers and Tinytoones. So that’s why it’s called ‘Between Tiny Cities’.”

If we count Merzouki’s recent work in Morocco, then these three choreographers not only represent hip-hop but all five continents.

Translated from German by Michael Turnbull.

In the 3-day workshop “Power Moves,” with Nick Power, Aaron Lim and Erak Mith, you explore the world of hip-hop. You learn the basics you need to find your style, you practice the technical moves, rolls, tricks and flips of breakdance – and you become a dance-maker yourself when you look at the choreographic ideas behind the piece “Between Tiny Cities” with Nick, Aaron and Erak.