Seeking into the unknown

Starting August 1 this article will also be part of the print version of Magazin im August, available for free at all festival venues.

The choreographer Anne Nguyen about her career in between hip-hop and contemporary dance, and about breakdance as a contemporary form of martial arts. 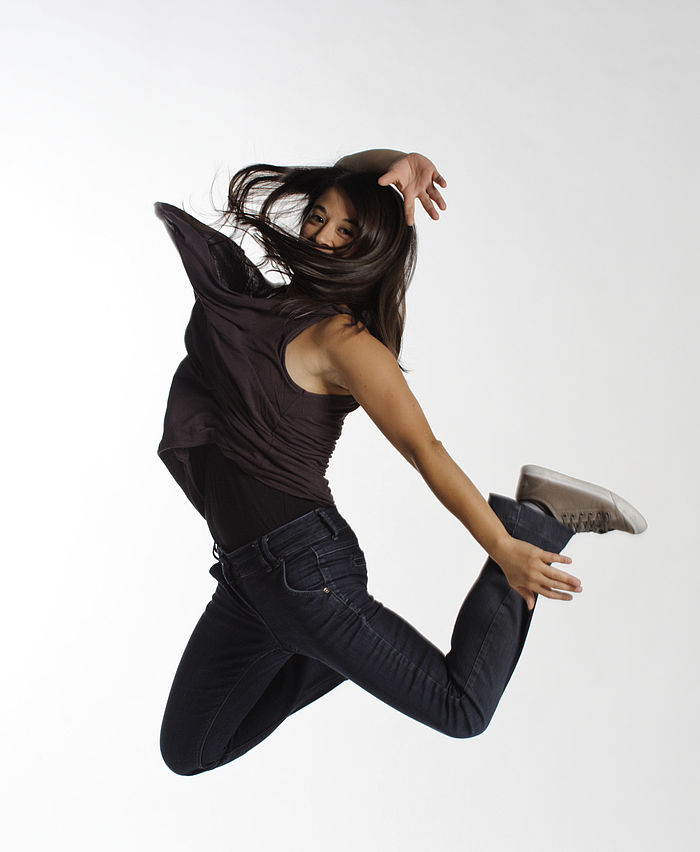 Virve Sutinen: How would you describe your relationship to hip hop?

Anne Nuyen: I didn’t make a conscious decision to become a choreographer. I simply felt the need to change the image associated with hip-hop dance and promote the virtuosity of its performance after spending a long time as a breakdancer taking part in battles and performing for other choreographers. I challenge the dance form and the intended purpose of on-stage performances. I take an interest in the geometric transposition of hip-hop moves, which are mostly circular and have to be performed within the stage, a square space. I examine the relationship between the performer and the audience, the relationship to the partner and the sense of togetherness on stage. For me the essence of hip hop lies in a desire to reconnect with our animal instincts, a need for physical exuberance, a desire to transcend the forms and energies that surround us. By combining freedom of movement and technique, hip-hop dance speaks to everyone. By choreographing its moves, I am seeking to amplify its implicit meaning.

VS: Where did you find support as a young artist with an urban-dance backround?

AN: The first thing I produced was in written form, my “Manual of the City Warrior”, a collection of poems in which I express the feeling of freedom one can experience when dancing, and relate urban dance to architecture. The choreographer Faustin Linyekula, for whom I danced at the time, urged me to choreograph a solo around these poems: “Square Root” thus came into being in 2005. It was an instant hit within the profession, and I performed the solo around the world for many years, while continuing to nurture my passion for breakdancing in battles and cyphers. At the same time I was developing my own dance company and building my career as a performer for contemporary and hip-hop dance companies, such as the famous “Black Blanc Beur”. I am very thankful in that many people who had seen my solo helped me on with my following productions. I also found real support on an institutional level. For instance, since 2012 I have been giving an artistic workshop on hip-hop dance at Sciences Po Paris.

VS: What is your role as an artist in society?

AN: The artist is meant to seek into the unknown, to try and derive meaning from it. I concentrate on gesture as a symbol, the body as the object of ownership, movement as a primary need, the stage as a priority platform for sharing. I want to question the limits of our freedom, our image of freedom, our desire for freedom. Though choreography I want to build symbolic spaces where powerful, liberating, frenzied dance becomes a magical ritual designed to make us take a renewed interest in the present, in the potential of our own lives. When I produce a show, I try to engage the dancers and those who observe in a transformative experience. To choreograph is to show representatives of humanity projected in an image of a codified world. The bonds between these individuals, the bonds between them and their world, and the bonds between them and the ‘otherwhere’ represented by the audience, represent the path that each individual must follow, either as a performer or as an onlooker.

VS: What helps you with creativity?

AN: “Yonder Woman”, “PROMENADE OBLIGATOIRE”, “Autarcie (….)”, “Kata”: the titles of my pieces reveal my many influences: from mathematics to the martial arts, as well as myths and utopia. I practiced gymnastics and martial arts, including Viet Vo Dao, capoeira and Brazilian jiu-jitsu. I also studied in the fields of physics, linguistics and literature. In my shows, dance is the purpose. I don’t distinguish between the technical excellence of body language and the intention conveyed by the dancer. It all begins with the essence of the gesture, the posture of the body, its position in space and its relationship to the ‘other’. Hip hop is a genuine breeding ground for postures, principles and energies packed with meaning. I am very focused on excellence in execution, but I reject any kind of academic approach: I develop the individualities of each dancer. I forge bonds between the movements and space inhabited by the bodies, through an exploration of technical constraints and game-playing.

VS: What is the idea behind “Kata”? Or What should the spectator know coming to see “Kata”?

AN: I was naturally propelled towards dance by a strong urge to seek beyond efficient, effective movement. With “Kata” I wanted to do the reverse: to start out with a dance made of seemingly useless movements and discover the usefulness in every gesture. For me, breakdance is a contemporary form of martial arts, a means of coping with a hostile urban environment that transforms the body through the violence of its shapes and constraints. Even where there are no enemies to face, no physical feats to accomplish in our everyday lives, the fighting spirit that drives the world of the living finds its expression through breakdance. It’s a form of discipline and ritual that connects with some of our deepest instincts, such as the conquest for physical strength and territory. I present the eight breakdancers in “Kata” as representatives of a warrior ideal that appears absurd in the present-day world. The piece is divided into three: ideal fighting, everyday fighting and absurd fighting.