Beatrix: How did the piece address your senses? I mean sight, hearing, smell, taste, touch …

Alex: How appropriate that this sensory dimension is there in the word ‘velvet’. I sat in the first row, and could smell the earth and the plants of the set. The idea of being in a primeval forest – a model of one – became very tangible. I’d even go further and say that there were moments in which smelling and feeling overlapped, and I could literally reach out and touch the earth that the performer threw herself into and ran through her fingers … And it came across too, in the alarming trembling of her body, the falling, the throwing herself down, the dramatically changing facial expressions, the rolling eyes, the rotating neck, when she would throw her head back with full force … 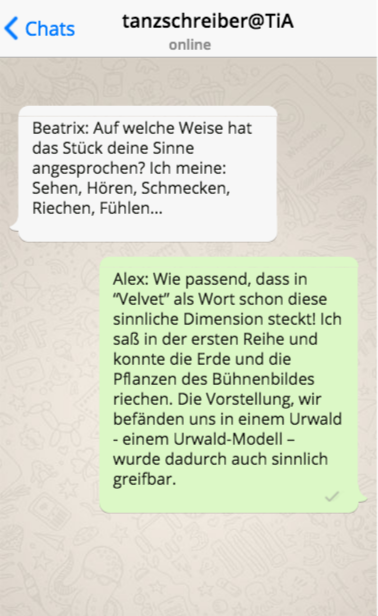 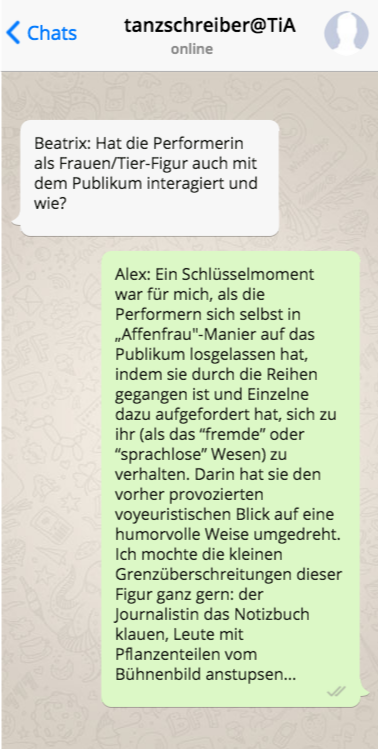 Beatrix: What kind of impact did the self-playing drums have on the space?

Alex: The drums had the effect of displacement. There were frequent rifts that interrupted the image of ‘nature’ or ‘wilderness’. The drums shifted the idea of ‘woman as a natural being’ into something like a circus ring, and I here I could hold on to everything that didn’t fit into the image, or that put the archetype of ‘woman as witch / animal / cave-dweller / lunatic’ in an ironic light: the garden-gnome fox, the cardboard Amazon backdrop, the sprinkler …!

Beatrix: Did this woman/animal figure also interact with the audience, and how?

Alex: A key moment for me was when the performer let herself loose on the audience like an ‘ape-woman’, by going through the rows and challenging people to respond to her (as the ‘alien’ or ‘dumb’ creature). In this she turned the voyeuristic gaze around in a humorous way. I liked this creature’s little transgressions: taking away the journalist’s notebook, prodding people with bits of plants from the set …

… A side line to finish up with: on the way home I had a very heated discussion with some people in the taxi – we had joined up by chance. The two other passengers were extremely annoyed by what they had seen. At first I thought they were exaggerating or making fun of it, but then I realised that they actually felt personally affronted by this performance of (untamed) femininity. Not insignificant that they were both men. But apart from that, the encounter showed me yet again that women who behave ‘uncomfortably’ – because they point something out that we’d like to push aside, that challenges us, perhaps even gets on our nerves a little – are always felt to be a problem and an attack on the order of things. After this taxi ride I thought: more uncomfortable women on the stage please!