Interview with the director of "17c", Annie-B Parson

“17c” is an ambitious and sensual intertextual romp through the diaries of Samuel Pepys, weaving music, dance, video and text into a spectacularly outré portrait of the famed 17th-century philanderer and his tragic wife Bess. Annie-B Parson, Artistic Director of Big Dance Theater, spoke with Adriana Leshko about the piece, her technique, Pepys’ diaries, and more. 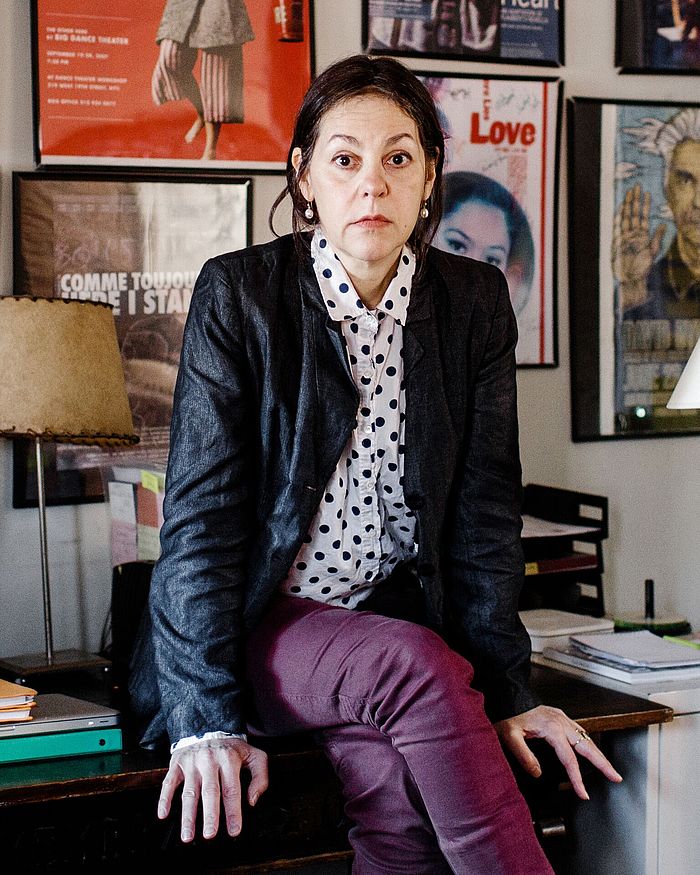 Adriana Leshko: How would you describe Big Dance Theater’s body of work to someone who has never seen it?

Annie-B Parson: Big Dance Theater, as its simple name suggests, has been in a protracted, aesthetic, alchemical conversation with dance and theatre simultaneously. All elements from both camps are in play: costumes, props, language, structuralism, the use of space, time, line, causation, relationship, shape, literature, sound design, singing, dancing…

Big Dance’s body of work is a sprawling compendium of material wherein abstraction and narrative work hand-in-hand to express the world, dance and language cohabitate, design matters, sound matters, the body in space matters, literature matters. In a Big Dance piece, form and content intersect and have equal sway in expressing the world – meaning: what we say and how we chose to say it, are equally important.

The sources for each piece are unique, yet I’ve noticed themes over time that consistently make their way into each work – these human contradictions: our desire to live against the immutability of our mortality; our desire to be autonomous in the face of our interconnectedness; and the playful nature of theatre against the innate tragedy of reality.

My work has always been defined by its privileging of dance in a theatrical context and the collision of forms this juxtaposition creates. This often materialises as text juxtaposed against movement forms themselves, as two concurrent systems of subject matter. I believe strongly in both the supportive and poetic power of structures that stem from dance-making tools that are unique to choreography, forms that can hold both a narrative and an unrelated ongoing movement piece at once, allowing the two elements to collide and resonate with each other. By way of training I am a choreographer, and my early works were dances. By the time I created my company, I was in collaboration with Paul Lazar, an actor and director, and the theatrical elements organically entered the work. 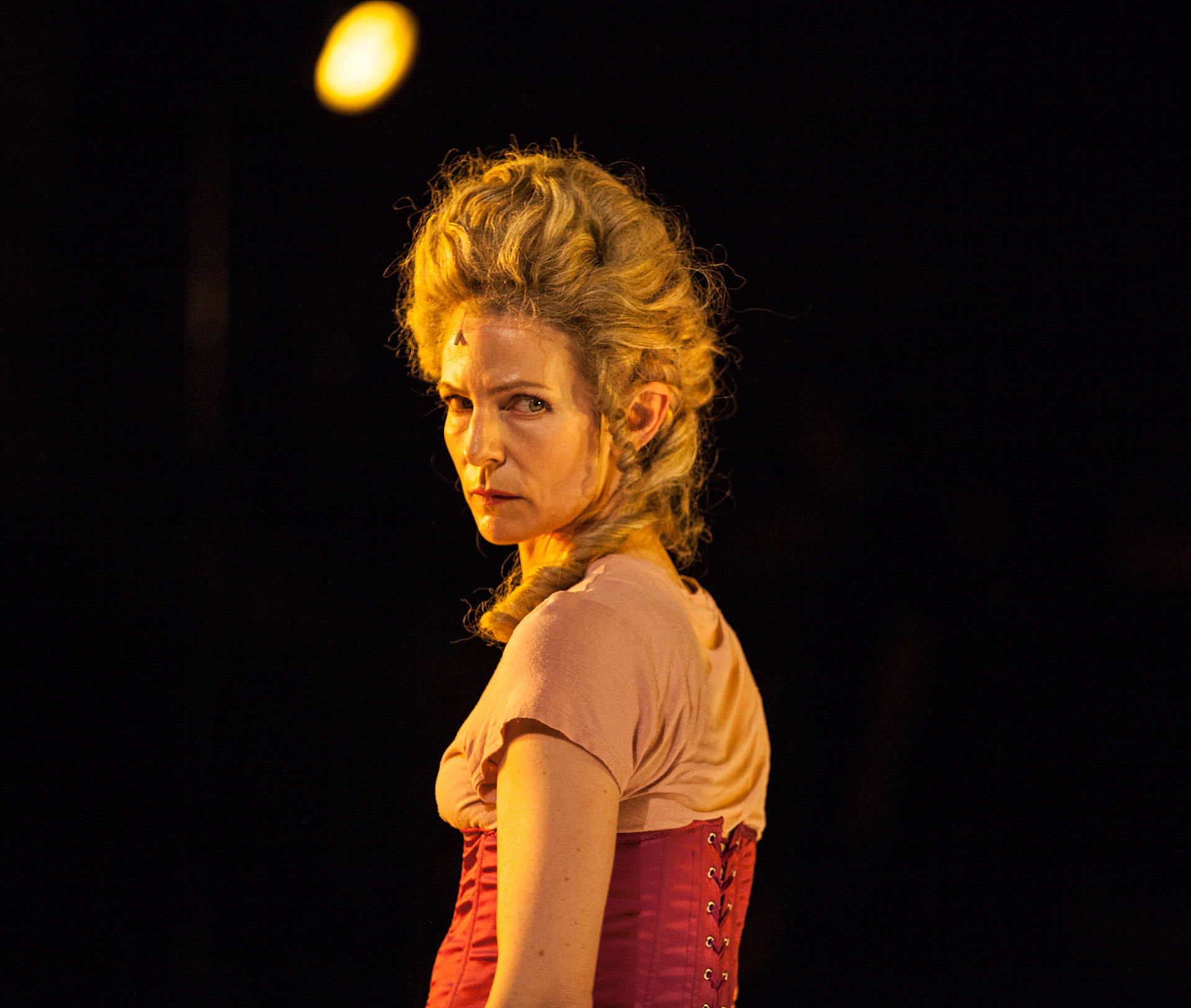 The voice of Bess Pepys, along with most women’s voices of that time, has been lost.

AL: What are some themes or ideas explored in “17c”?

ABP: The piece poses many questions: What does it mean to be hyper-generative? How have our technologies of writing the self-evolved and how has that affected who we are? And, specifically in regards to Bess Pepys, whose voice, along with most women’s voices of that time has been lost: What does it mean NOT to have a diary endure through time, NOT to be read? Or, the legacy of erasing women’s lives is a blow to the passing down of identit(ies) for women, while men have maintained a narrative through-line by way of publishing their ‘self.’ How do we retrieve identities that have been erased? In “17c”, I have opened up the margins of lost voices by creating writing for Bess that is circular and holds ambiguity and sadness. And finally, the piece confronts the audience with conflating today with the 17th century, 350 years of powerful men’s abusive treatment of less powerful women (citation: Uber, Trump, Murdoch, Weinstein…)

AL: What drew you to Pepys initially? And how is his obsessive chronicling of his own life relevant to our contemporary moment?

ABP: My first induction into Samuel Pepys’ compendious diaries was through an abridged one, and I was charmed and vindicated by how much he valued learning to dance, going to the theater (he saw it as a vice he couldn’t quite quit), and daily singing and music classes. In the argument between: the past is so different from contemporary life, and – people never change, it seemed here was a chronicle of a time when art mattered greatly, enough to live for and fight for – very unlike our own. But, Pepys was eye opening in how unusual he was for his time, not because he was a diarist, but because of his compulsive, plain spoken and uncensored writing – it reminded me of a Facebook page! Much like our own constant social media updates, he needed to get everything down on paper or he felt lost; he possessed this same compulsion to assign a real-time meaning to his daily existence. Dispensing with the flowery language of the day, he recorded every toothache, desire, aspiration, thrill, and frill as he rode, strode, groped, bullied, and danced through his days. And his descriptions of his life are unbound by any moralising or spiritual component; Pepys “keeps it real.”

Later, I got a hold of the unabridged diaries and saw a darker, uglier side of Pepys. While he has a contemporary self-awareness, he is also totally emboldened by and oblivious to his unacknowledged bias against women and aggression toward them. Pepys writes openly about groping and raping women as a matter of course. And the subtext of it all is that this behavior is accepted and regular. He seems to hold no shame or fear of retribution. His uncensored writing on his abusive relationships with women renders him vulnerable and valuable to observe, interrogate, and challenge.

AL: Who was Margaret Cavendish and what is her role in the work?

ABP: Mad Madge, as she was called, was a 17th century playwright, largely unpublished in her time, who lived in the same city and time as Pepys, and intersected a bit with him. She was a radical feminist thinker and an enfant terrible type. I had the idea to include a play in the piece that Pepys and Bess may have seen; I wanted to include the voice of a woman. Most of the women I read wrote in the flowery Restoration style of the day, while Margaret Cavendish did not. Her subject matter is women and their lives and freedom. I was instantly smitten. I include an edit of her play “The Convent of Pleasure” in “17c,” as a play within a play.

AL: Could you talk about the importance of movement / choreography in illuminating the character of Bess, Pepys’ long-suffering wife? 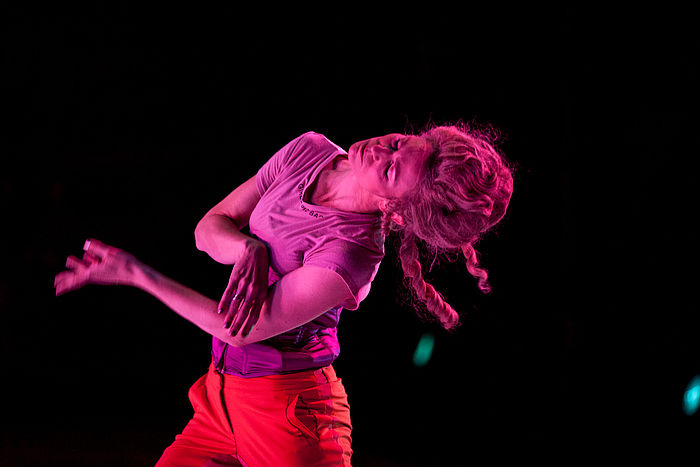 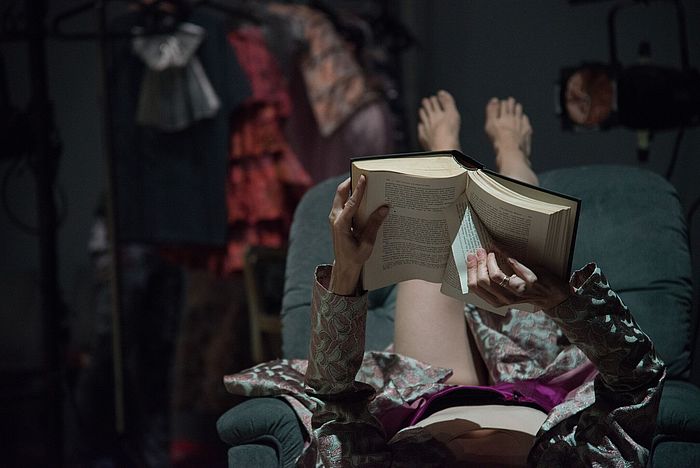 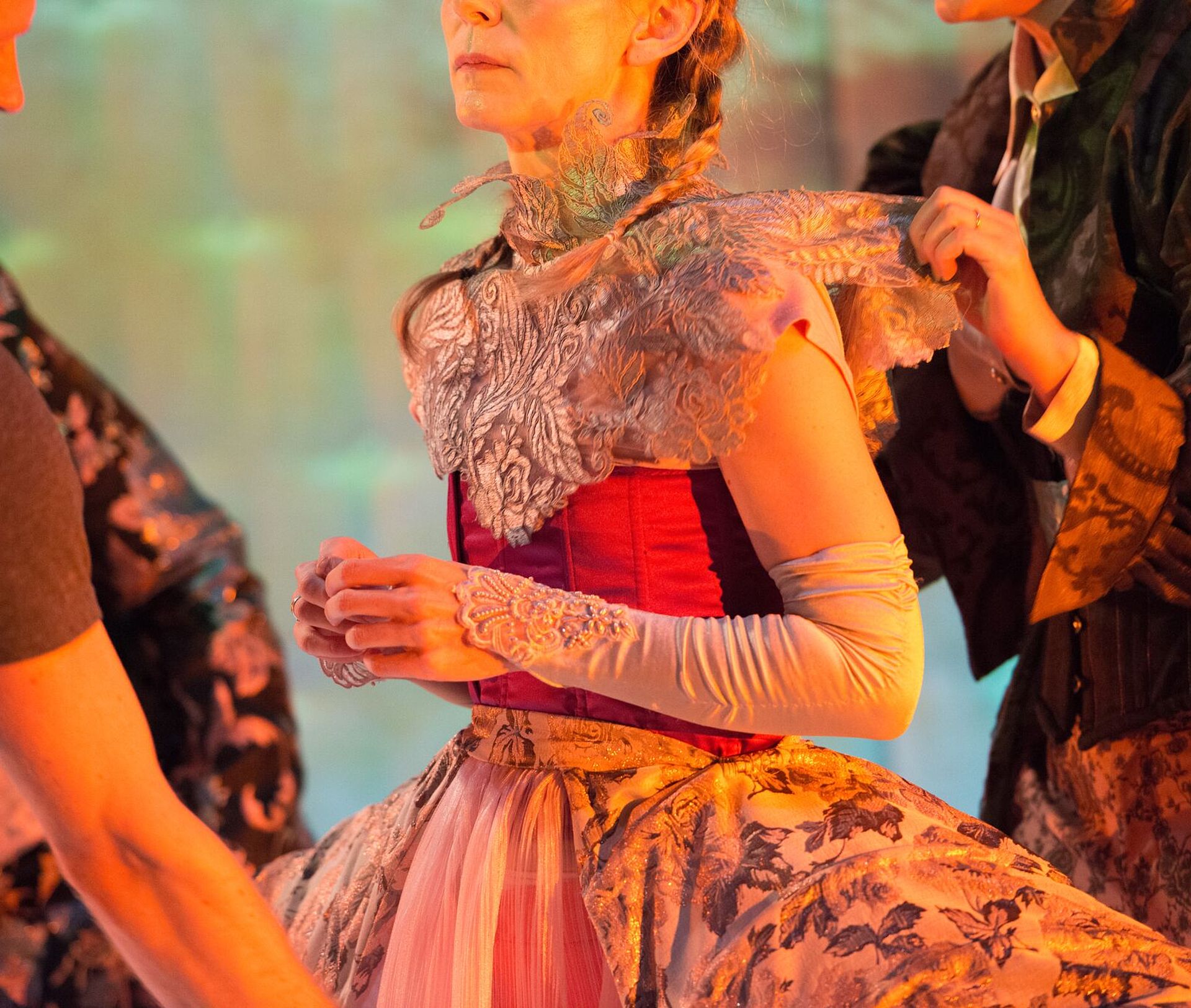 Dance was one way of letting Bess speak without access to her diaries. 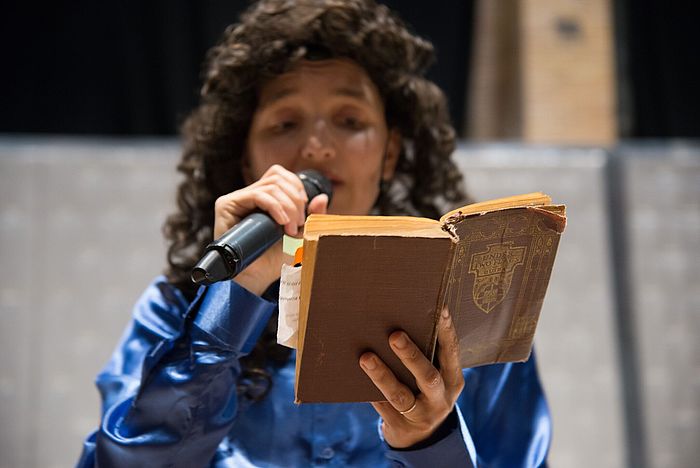 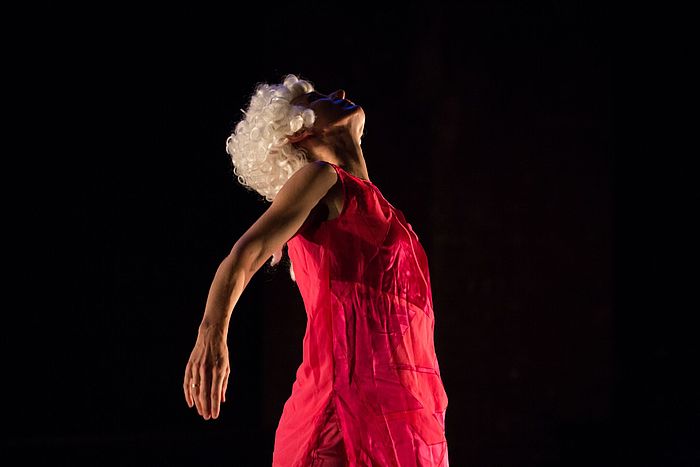 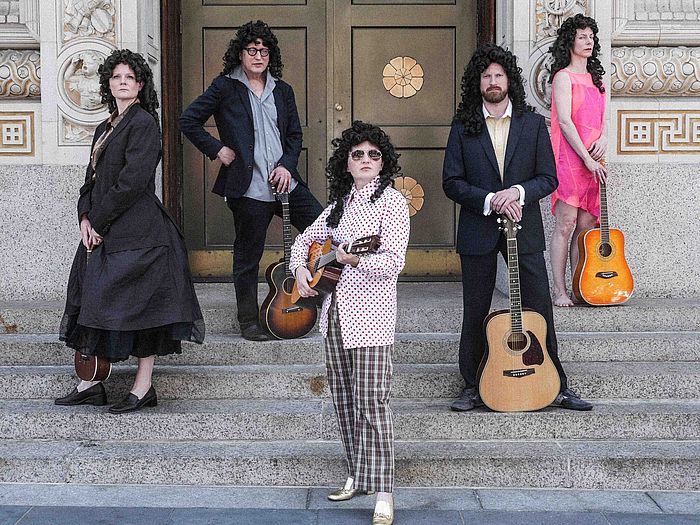 ABP: In reading the diaries over many years there was a gnawing wonder about Bess’ voice; I strongly suspected that she too had written a diary but if so – where was it? Finally, last year I stumbled on a passage that answered my question: in a rage at her, Pepys admits to finding her diaries: “I burnt them all” he admits. (He also describes with relish and detail, that as he is raging and burning, his trousers are caught around his ankles!) So dance was one way of letting Bess speak without access to her diaries. I assumed that since her life was so hidden, she might have a raging inner life. So I choreographed her with shading and interiority.

AL: Describe a typical Big Dance Theater rehearsal or rehearsal process, if such a thing exists.

ABP: I came to the theatre through dance, and this has influenced the way I work. Most people think of theatre as something that is – first and foremost – written. However, I have always approached theatre as something that is constructed, developed, grown, through movement and its forms. Many theatre rehearsals begin sitting around a table, reading a script. Big Dance works start with dances – on your feet – gathering sources, generating material, marinating, experimenting, honing, refining in tandem with the performers and designers. So our rehearsals often focus on generating movement through forms. Here’s a metaphor: I construct a recipe and the dancers make a prototype of a piece of cake, then I taste it and change the seasoning; they refine that, and back and forth it goes.

AL: What are some questions you wish you would be asked in Q & As such as these, whether about “17c” specifically or about your career writ large? How has the work you do outside your company affected what you make for the company and vice versa? What writers have influenced you? What composers? Who are your art heroes? What has been your most memorable ‘Next Wave’ [festival at Brooklyn Academy of Music] experience as an audience member?

ABP: As a young choreographer in 1984 on my first visit to BAM I saw Pina Bausch’s “Café Müller”. Having been immersed in the prosaic, structural, and virtuosic pedestrianism of the early Judson Church dance-makers and second gen-Judsons, I was intoxicated by Bausch’s use of dance in relation to costume, sexuality, relationship, scenario, and character. This was a decidedly European perspective on dance from an entirely different family tree than the downtown dance scene of the time, and divorced as well from the Modernists who I rejected out of hand. I continued to see her work at BAM. Last time, I saw the first Pina Bausch piece without Pina Bausch on Earth, and I learned something new about the mechanics of her work. I felt a strange absence in the theatre and in the work itself and realised watching it that all these years her dancers had been dancing FOR her, and her alone. Choreography is a very personal sport. And it’s more perishable than fruit.