"The body is a living archive"

Wayne McGregor on turning his DNA into dance

The brainbox of British dance is creating choreography from his own genetic code in an adventurous new show. It’s the latest experiment at his hi-tech dance headquarter, where the lift changes colour and dancers rehearse in playful spaces.

In a shiny Airstream trailer, on the roof of his company’s new headquarters, Wayne McGregor looks across the Olympic Park in Stratford, east London. This is not your usual dance headquarter. But McGregor isn’t what you’d expect from a choreographer. The resident brainbox of British dance is always questing for new territory. His work with ballet companies often attracts headlines – it’s a world new to extreme moves, music by Mark Ronson and the White Stripes, big ideas about the multiverse – but his own company is a research lab for innovation.

Now, the science geek is using his own DNA, and collaborating with scientists at the Wellcome Trust Sanger Institute, as the inspiration for a show called “Autobiography”. “If you’re looking for a document of my life with a narrative arc about me growing up in Stockport, you’ll be frustrated,” he grins. Instead, it’s “Who Do You Think You Are?” but with genes. The show began taking shape when McGregor wondered how artificial intelligence (Al) might animate his archive of 25 years’ working in dance. This led him to consider the body itself as “a living archive. Not as a nostalgia-fest but as an idea of speculative future. Each cell carries in it the whole blueprint of your life, basically.” Your genetic code tells the story of your past – and predicts possible stories of your future. 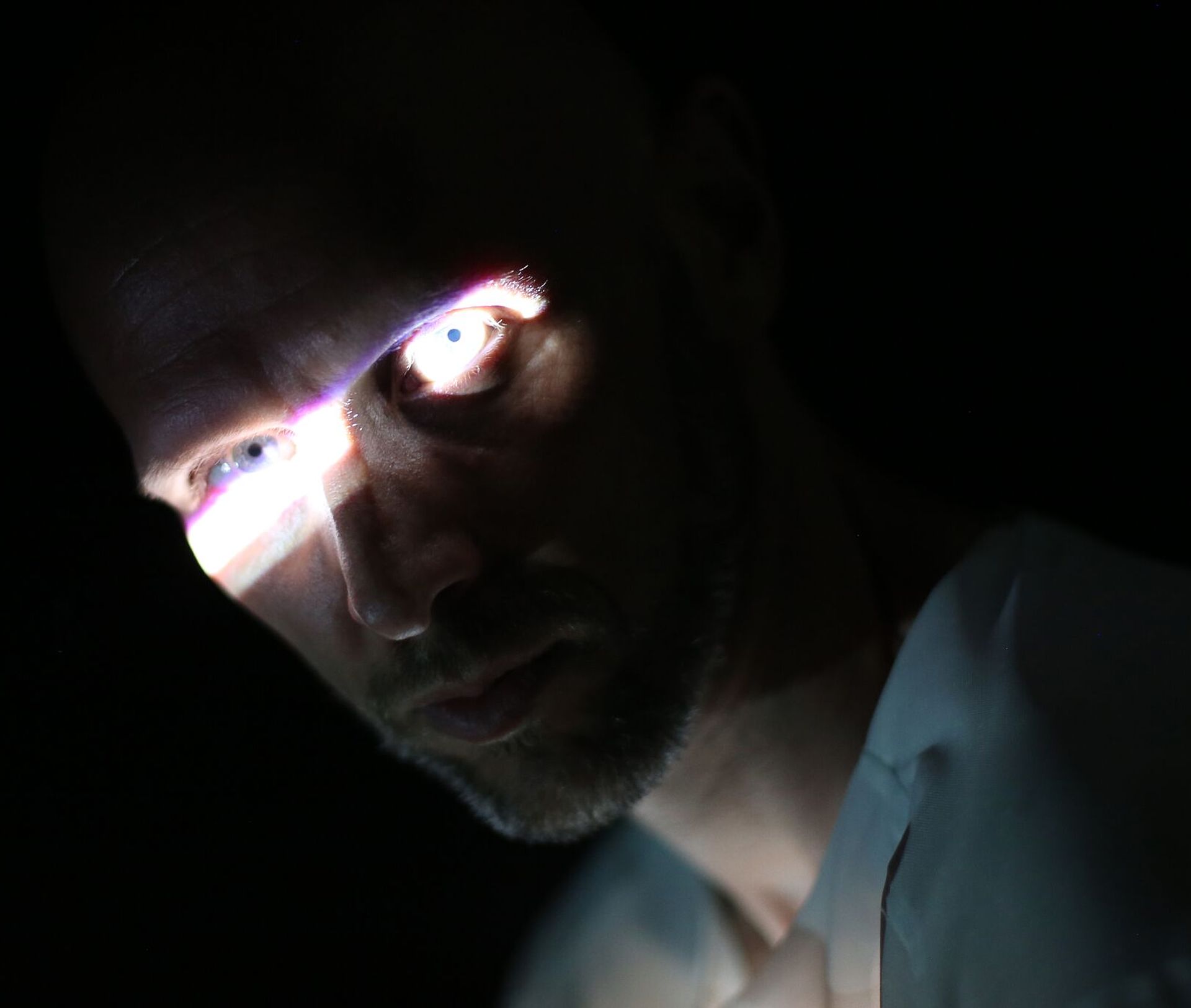 It is a piece that changes every night. We can get 24,000 permutations – we don’t have that many shows!

Eager to learn more, McGregor tried the online DNA test “23andMe”. “But that wasn’t enough – I wanted a full sequence [of his own genome].” Through researchers in Utrecht, he is accessing “three billion bits of information. As a storage system it’s absolutely enormous – 60 volumes of the Encyclopaedia Britannica. Thinking of genetics as a data-storing system, how might we be able to store dance in our genetic makeup? I’m interested to see how we can take that information and convert it into other forms.”

How does data become dance? “Autobiography” pays tribute to the American master Merce Cunningham, a pioneer of using software to generate new choreographic material. In a programme note, the dramaturg of “Autobiography”, Uzma Hameed, explains: “In this piece, book-ended by a fixed beginning and end, a number of choreographic events from the 23 volumes in the ‘life library’ are selected and sequenced afresh for every performance by an algorithm based on McGregor’s genetic code. For each iteration of the piece, the computer randomly selects a different section of code from the choreographer’s genome to determine which material the audience will see, performed by which dancers and in what order. The System dictates that no individual sequence of code can be used more than once, so that no two performances can ever be alike.”

lt is, says McGregor, “a piece that changes every night. We can get 24,000 permutations – we don’t have that many shows! It’s a struggle for the dancers, not knowing what they’re doing [very far] in advance, but then making meaning from it. It’s a little experiment that I think speaks directly to the idea of life-writing. Life unfolds, without our having control, and we have to deal with those instances. I think that can be a really beautiful thing.” 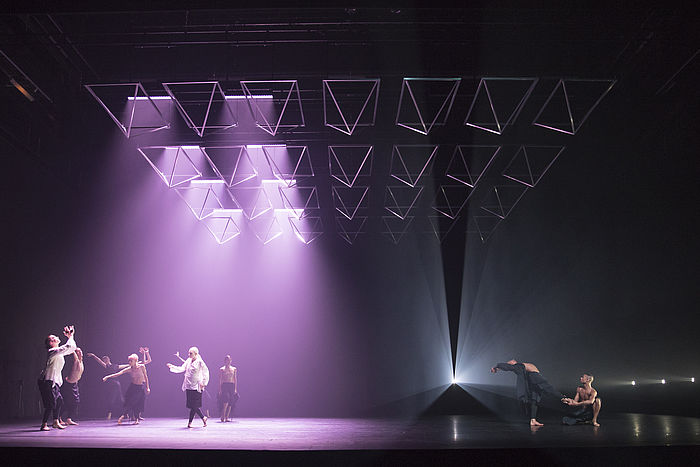 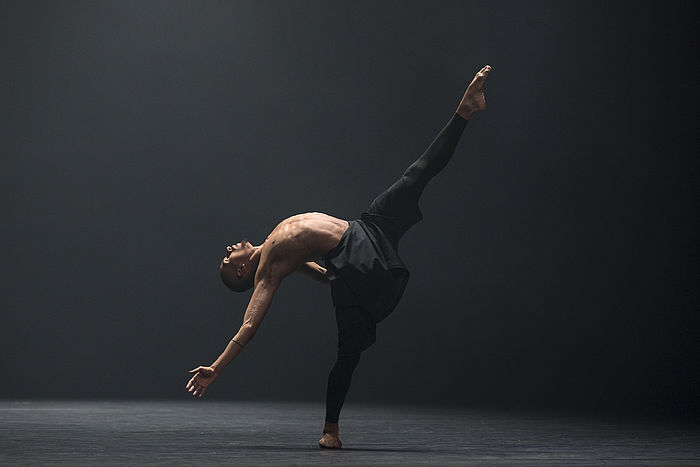 On your first encounter with a new piece by McGregor, you’ll often process the big ideas and cutting-edge tech. Only later do you twig an undertow of hope and hurt. So how personal is “Autobiography”? “A lot of the material we worked on was very personal stuff that I’ve not shared with people. Family things, photographs, poetry I’ve written.” But he skews away from self-revelation: “I’ve always felt that autobiographies are fictions”, he says.

We’ve just whizzed around the company’s new home, the tall, lean McGregor beaming with undisguised glee, like the Willy Wonka of contemporary dance architecture. Most dance organisations squat in boxy offices and anonymous dance studios, but this high-walled space, couched in the former Olympic media centre, allowed a rethink. “All of the rules around dance studios,” McGregor says, “we need to change them a bit. We put ideas first, and then tried to keep hold of the vision, matching the amount of money we had available. lt doesn’t have to be expensive, but it should be beautiful.”

So there are original artworks by Josef Albers (a longtime favourite), a translucent lift that changes colour as it moves and a globe of pitch-black obsidian. There’s a periscope view of the London skyline and that beloved Airstream. “It’s about how you make rooms playful, using your perceptive facility in different ways”, the choreographer says.

“It’s a space for artists to make dance in”, he asserts. McGregor’s is not the only work being made here. In a city of prohibitively expensive rehearsal spaces, the new building is a godsend – but exacts an intriguing quid pro quo. “I felt from the very beginning that it would be a failure if this building was rented out all the time to commercial partners”, he tells me. “Obviously, we have to make the maths work. But every year we invite 25 artists and their teams, and they have five weeks of rehearsal space totally free.” These include established names like Shobana Jeyasingh and Candoco, as well as rising stars. “For every week we give them, they give me back a day”, he continues. “We work with them on curating an education programme across the country. So we get real artists working in the spaces, and we get amazing artists out across the country doing 25 weeks of really interesting education work.”

The new home also coincides with landmark anniversaries in McGregor’s career. His company is 25 years old – it’s no small achievement for an independent dance company to survive and thrive for so long. In 2016, he celebrated 10 years as resident choreographer at the Royal Ballet, which mounted a retrospective of his work – from 2006’s “Chroma”, still a banger of a ballet, to the audaciously involving “Woolf Works”. McGregor groans: “You’re looking back at decisions you made then with your eyes now – never pleasant!” But the experience did reinforce one key principle – that “artists are in the business of failing. You want to be working out what your next questions are – what’s important is this process of unfolding, making a series of decisions. What might you take on or counter in the next thing you’re making?”

Other than Lucy Carter, his steadfast genius of a lighting designer, each McGregor piece typically involves a raft of new collaborators. ”It is a conscious decision. You want perturbers, people to upset your way of working. It has to take you somewhere new or there’s no point.” For “Autobiography”, colleagues include the electronic musician Jlin (“she writes super-personal, very rhythmic music which expresses something of the energy of me”), the artist Ben Cullen Williams and the artist and designer Aitor Throup. “I always start as a fan of these people, then reach out to them.”

On paper, McGregor can seem detached, an ideas man only. His programme notes are famously impenetrable. But in person, he’s all fanboy enthusiasm, a long streak of fizz. This extends to his freelance gigs in fashion, art and big-budget movies. He’s due to work on Josie Rourke’s debut film, “Mary Queen of Scots”, and recently wrapped “Fantastic Beasts and Where to Find Them 2”. “I just love it,” he exults. “Part of the fun is trying to give people what they’ve imagined, not doing your own weird interpretation. And you get the opportunity to work with this tech which you can repurpose for your own stuff.”

I first saw McGregor as a solo artist, boggling as his extended frame offered freakoid moves from another planet. Twenty-five years on, he’s still finding new territory. “I’ve still got a massive drive for projects and having access to really interesting science”, he admits. “Genetics and AI – it’s a massive field that’s going to explode over the next five years.” And in his Willy Wonka dance factory, McGregor’s ready for blast-off.

This article was initially published by The Guardian in October 2017. 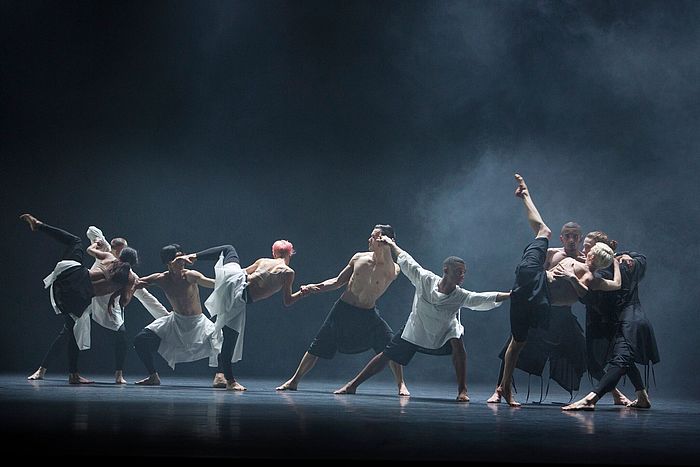