Choreographer Aydin Teker is looking for consequence and significance

Specific events within one’s lifetime exert such force that it becomes no longer possible to take for granted one’s habitual ways of doing things. The Gezi Uprising of June 2013, the most enormous wave of demonstrations and civil upheaval in the history of modern Turkey, was one such event that catapulted diverse groups and individuals from their isolation to the public realm where a sense of ‘public happiness’ prevailed.

Hannah Arendt describes ‘public happiness’ as the ‘treasure’ of revolutionary moments where a sense of possibility and potency prevail. Yet this treasure is fragile because it comes to being through action the consequences of which cannot be foreseen. Political action, for Arendt, is performance par excellence: it does not subscribe to means-ends rationality; it is an end in itself. In that regard, it is similar to a virtuoso performance where one enjoys acting for its own sake.

As the courses of action are irreversible and unpredictable, this ’treasure‘can get lost in the murk of history. Establishing a common world and carrying forth the legacy of revolutionary moments requires skilled ’pearl divers‘ who memorialise this ’lost treasure’ through stories, artworks, poetry, and historiography. And, for these to be able to appear, to be looked at and talked about in ways that matter, depends, of course, on the existence of spaces of appearances, which is precisely that which authoritarian regimes and tyrannies aim to eradicate.

The culture-creating spontaneity and the world-making dimensions of the uprising manifested the intertwinement of aesthetics and politics in such a way that no artistic programme in/for/about public spaces and no artworks with political pretensions could approximate. In this context, as part of ongoing research, I’ve been trying to understand how a group of artists is responding to or documenting the recent political developments in Turkey and how the experience of Gezi informed or transformed their practice – if it has done at all. Some self-declared performance artists conflated the performativity of political action with using the protest context as the backdrop to exhibit superficial understandings of performance art.

There are, of course, those artists who began to think differently, to process the political, psychic, and aesthetic challenges of our times. I consider Aydin Teker as one of them. Since her retirement from her post as the Chair of the Contemporary Dance Department of Mimar Sinan University of Fine Arts five years ago, Teker is living in the country side.

Gurur Ertem: On March 14, 2015 I had the chance to see “Hallo!”. It was one of the rehearsals before the premiere. At that time, I think a lot of artists and academics were still grappling with the anxiety of not being able to fully comprehend and articulate the depressing aftermath of Gezi. For me, you were one of the first – and the quickest in the dance field – to process this experience, taking up the challenge to find the appropriate format to articulate this anxiety via choreographic means.

Aydin Teker: It is my quickest piece, indeed: I created it only within a few months. I vomited this piece: in a way, it emerged out of my control. I had been through a period of two years when I didn’t feel any creative urge to do something. I never create just because … Every piece I’ve made so far is because I couldn’t help myself; they just had to get out.

GE: So, could you tell me the story of the making of “Hallo!” in the wake Gezi?

AT: I had begun to feel that so many things I had done so far had no real consequence or significance. More interestingly, I realised the extent to which we were a minority! It had never occurred to me what a sterile and sheltered life I had. Of course, I was lucky to be doing something I loved, but some things no longer made sense. The world was changing rapidly, and I no longer felt I was a part of it … Relations became so horizontal that I also understood I’m not the type of educator for this new world. So, I stopped and thought of not creating any further choreographic work. And yet, in the meantime, Gizem Aksu, a former student of mine who had always captivated me, completed her studies. As a principle I don’t get involved in work relations with my students but after she gradu ated we wanted to try a few things together without caring much about the outcome, and this process evolved to “Hallo!”. There was a treadmill at school in one of the studios, and Gizem was running a lot at that time, in parks and streets. So we met at the treadmill and started to work on emotions. Gradually, it started taking shape. It was fascinating to observe someone running on the treadmill for thirty-five minutes; all the transformations taking place at the level of the body, the mood, the face… 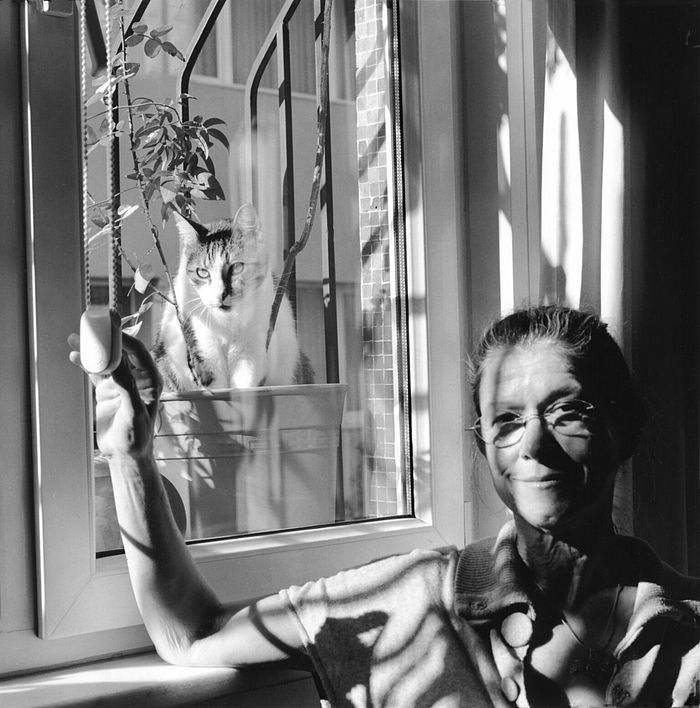 Aydin Teker has worked for over 25 years in Istanbul, and is still one of Turkey’s most radical artists. 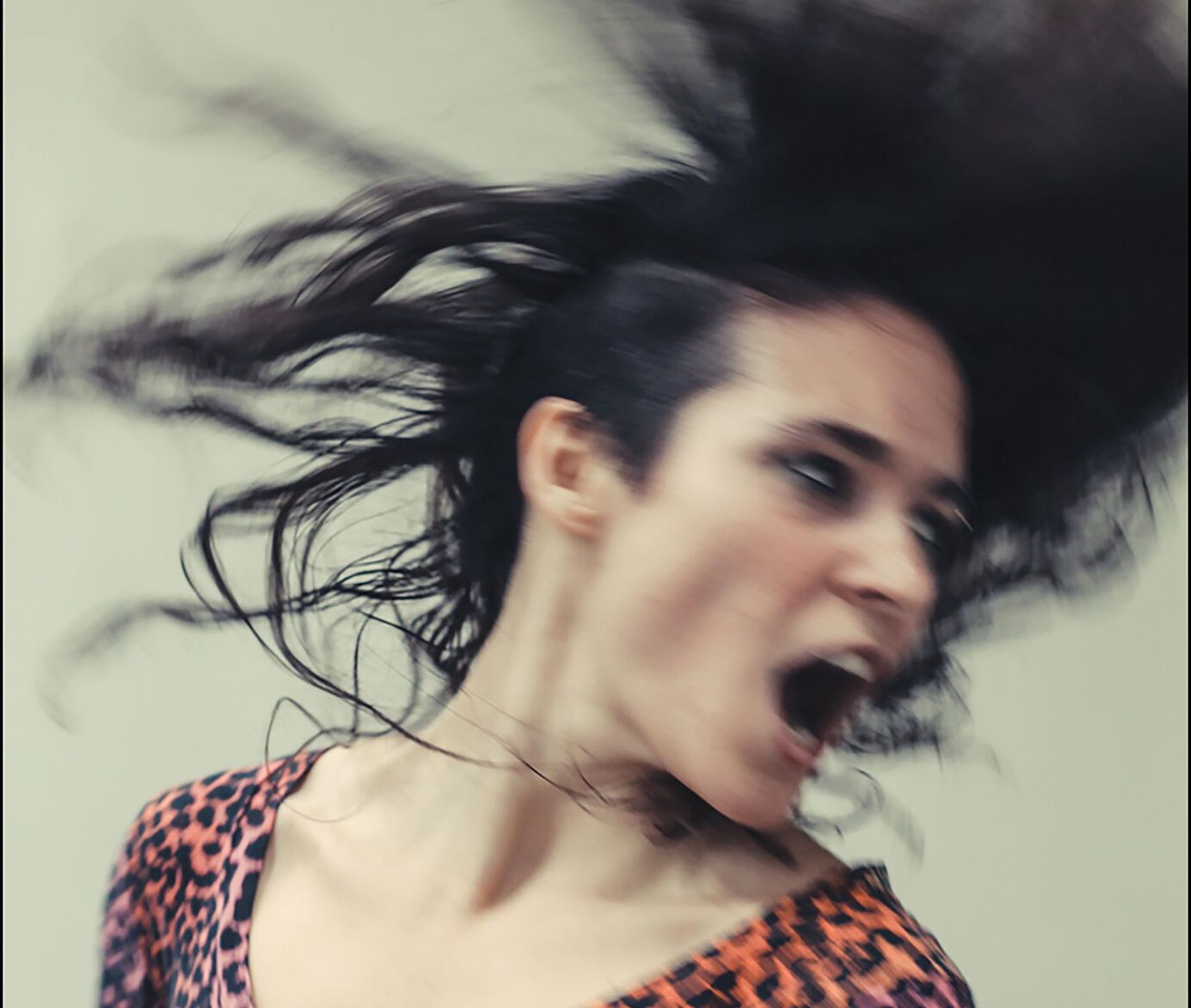 Now, when I think retrospectively, the treadmill is also like life itself; flowing continually, speeding up as you get older …

GE: You are a choreographer who does not insist on creating only for the black box or the theatrical stage. You created numerous site-specific works throughout your fourty-year career. Plus, you’ve worked a lot with given or fabricated objects as integral elements to your pieces. To recall the more recent ones: “harS” (2008) features a harp, the musical instrument, ‘defamiliarised’ in its interactions with the per former Ay¸se Orhon; and “aKabi” (2005) where some terribly high platform shoes transform the bodies of a cast of five dancers. I think in these works the objects appear as tools or prostheses that extend the body or merge with it. Yet in “Hallo!” there seems to be a shift regarding the relationship of the body to the object-world. Here, we find the object not as tool but as machine and the relationship is one of alienation instead of assimilation.

AT: Now, when I think retrospectively, the treadmill is also like life itself; flowing continually, speeding up as you get older … I find the treadmill very ‘contemporary’.

GE: It indeed is. It also reminds me of our overwhelming, vertiginous timelines. We’re subjected to this constant flow, but at the same time we don’t think of just getting off; it evokes the feeling of being trapped in the devices of our own making! You’ve mentioned at one point that it’s your first piece where you focus on emotions per se. When I was attending your rehearsal, I did feel there was a lot of narrativised emotion. But, at the same time, there is still a very Aydin Teker feature: the intensification of a single moment; the gradual condensation and amplification of a particular mood or a movement to the point of it becoming contagious, like the spread of a squid’s dark ink into the atmosphere.

AT: Creating “Hallo!” was not an easy process at all. I re-experienced each day the trauma of not being heard. The experience of Gezi was very heavy on me. People were trying to get their voices across in a peaceful, joyful manner but we were not heard! I began to think I had to share this. This desire to share the experience of not being heard played a significant role in the creation of “Hallo!”. The most important thing about this piece is how much I’ve learned in the process of making it. It was a confrontation with myself that made me ask: How much do I hear? Did I ever hear my students? How much could I hear the ones I loved? And, most importantly, how much did I hear my daughter? I dedicated this piece to my daughter Çağrı. She is probably the person I didn’t hear most as someone closest to me. It was my work that got all my attention; it had all the priority. So, in a way, this piece is an apology… At the same time, it is a question to others: Yes, it is terrible to not be heard, but how much are you able to or willing to hear?

GE: In what contexts and places did you perform it so far?

AT: We performed it in many different places: a home-office, a library-cafe, a factory … We played it in various cities in Turkey such as Istanbul, Izmir, Bursa, Eskişehir, Ayvalik … I think this piece has broad appeal and can speak to everyone regardless of age or background. We’ve tried to reach as many people as possible … Yet it is an intimate piece, it needs to be performed in small spaces because it requires focus, attention, and closeness. It relates to the human condition, touches upon something held in common, an aspect that has become precious to me. I think Gezi has helped me grow in that regard.

We need to reclaim our country.

GE: What do you think of the state of the arts, dance, and theatre today in Turkey? Have you been able to see any performances recently?

AT: I try to follow the creations of young choreographers whenever I go to Istanbul. I think some things are swelling and budding. I feel that this much pressure is going to make something explode. I think we shouldn’t lose our hope because there is nothing left once we lose it. We are all responsible for the situation in Turkey. We are guilty of having been so passive and not realising the ways things could develop much earlier. We couldn’t defend our existing values strongly enough. The political system is messed up, and there is no genuine effort to correct it because the egos are hugely inflated. But at the same time there is a cohort of wonderful young people upcoming. I feel there will be positive developments… We need to reclaim our country. I believe there is no other place, no other country that’s better so we shouldn't fool ourselves. I think it’s the entire humanity that is sick, the system is ill. There are similar developments everywhere. So, I think first we need to protect ourselves, then the earth, that is, the natural environment, the actual material land. Maybe it’s all going to evolve to a better place, and it cannot be without art: “Hallo!” has healed me … If we don’t find the beauty in small things, we can no longer be, we will disappear, and that means defeat. Instead, we need to pay attention to small things; the ability to breathe, the color of a little flower, the sound of the rooster – even that contributes to our well-being. The world is precious, and we cannot give up.