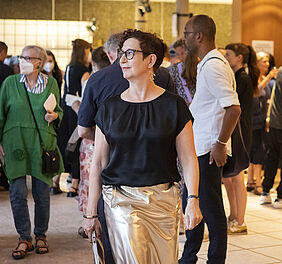 Tanz im August was directed for the last time in 2022 by Virve Sutinen, who has been responsible for the festival programme a total of nine times since 2014 and opened it up widely to audiences and the dance scene internationally and throughout Germany. Virve Sutinen underlined the position of Tanz im August as one of the most important European festivals for contemporary dance. Sutinen's programme was characterised by productions by a young generation of choreographers and contemporary classics, international co-productions and special outdoor events, a forward-looking thematic approach with numerous discussion formats and an opening to other artistic genres. With the Big Pulse Dance Alliance project, which she co-initiated, she also promoted a sustainable networking of the European dance scene. The retrospectives she initiated together with curator Andrea Niederbuchner, which brought influential female choreographers into the public's focus and paid tribute to them every two years (2015: Rosemary Butcher, 2017: La Ribot, 2019: Deborah Hay, 2022: Cristina Caprioli / ccap), will have a particularly lasting effect.

We are now looking forward to Ricardo Carmona, who will take over the Artistic Direction of Tanz im August from the 2023 edition.