In the past 30 years, dance criticism has twice been the central theme of Tanz im August. Getting upset over criticism and critics and disqualifying them as clueless phrasemongers is nothing new. Nor is the passion of critics for their work. Theodor Fontane, who wrote detailed theatre reviews for the Berlin-published Vossische Zeitungin the 1880s, lamented his arduous occupation:

“You sit down and have three hours to write an incredibly long critique of a very –I’m sure I don’t need to tell you this – difficult subject. There is already a girl all rugged up standing behind you with a one Mark coin in her hand, waiting to jump in a first-class cab. Everything is done in haste, fear, and agitation, and yet the miserable old man is still sitting at his desk poring over the pages and, and he’s still not finished.”
(Petra Kohse: “Aggressive in Praise as well”, nachtkritik.de, January 2009)

And it’s still like that today. The feeling of imperfection is a constant companion to the dance critic. The “question of how possible it is to describe movement and dance” became a central topic for TanzWerkstatt in 1989. 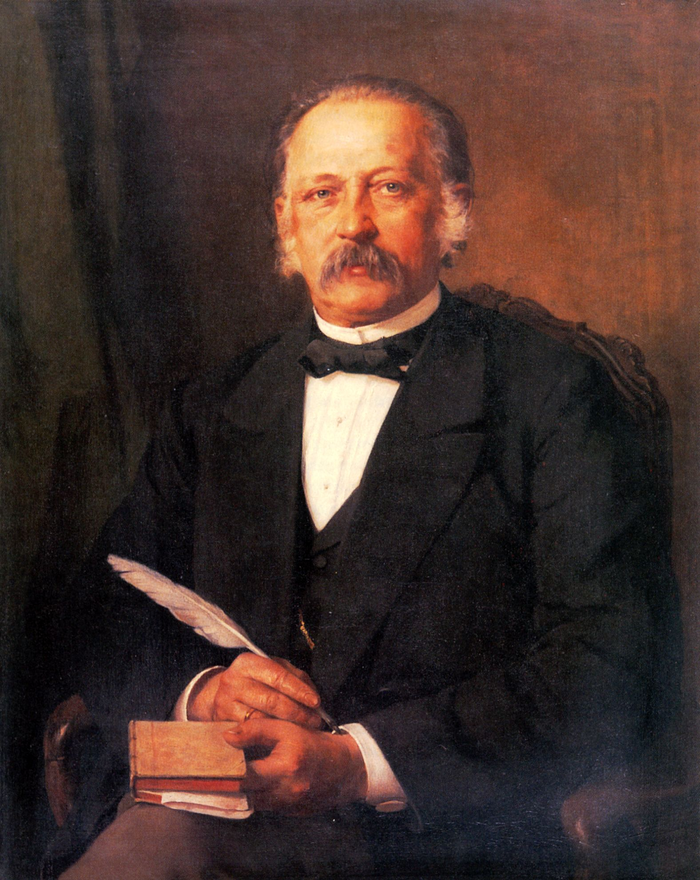 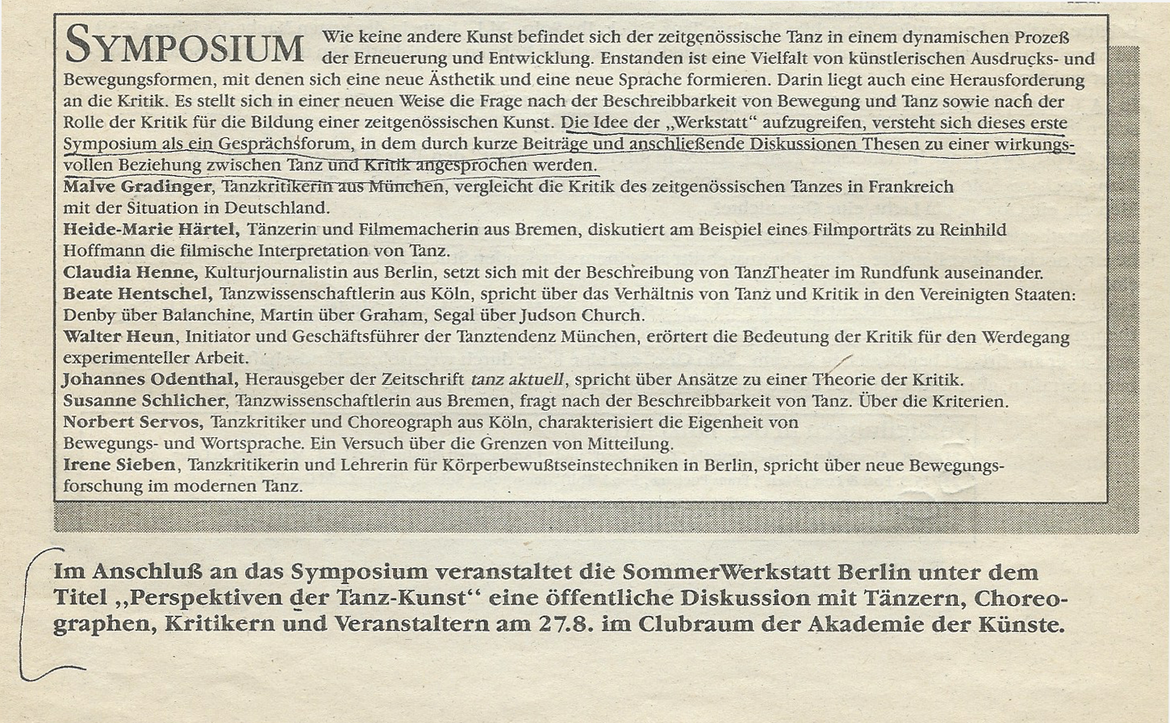 In his presentation, dance journalist Norbert Servos took his colleagues to task:

It’s just not done.
Scepticism, irritation, dismissal. Those were the first reactions from friends and foes alike, when six years ago I decided writing wasn’t enough for me, and that I wanted to allow the images that were flying around in my head and my body to take form in flesh and blood. But it’s just not done. At least not in these parts. I was moving between two worlds, and to this day, the collective of my writing colleagues still can’t quite believe it. From well-meaning reservation to open attacks, they continue to try out all means of exclusion.”
From Zur Beschreibbarkeit des Tanzes: Tanz in den Massenmedien (On Describing Dance: Dance in the  Mass Media), symposium, August 1989, TanzWerkstatt Berlin 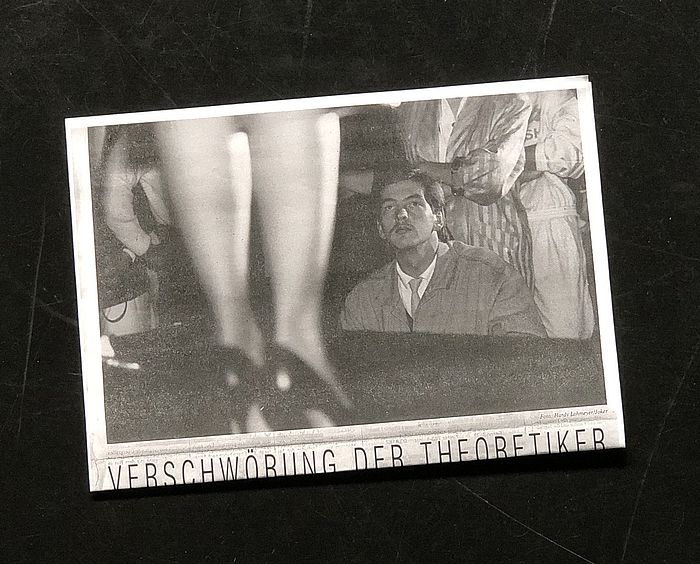 He strongly criticised their ‘herd mentality’ and called for a ‘poetics of dance’, wishing that critics would finally trade in their “critical posture, which sought to create an imposing image of incorruptibility and confidence, for a stance defined by openness, alertness and a lust for discovery.”

The subsequent discussion among the symposium participants was controversial:

In his magazine tanz aktuell, Johannes Odenthal took up the subject once again: 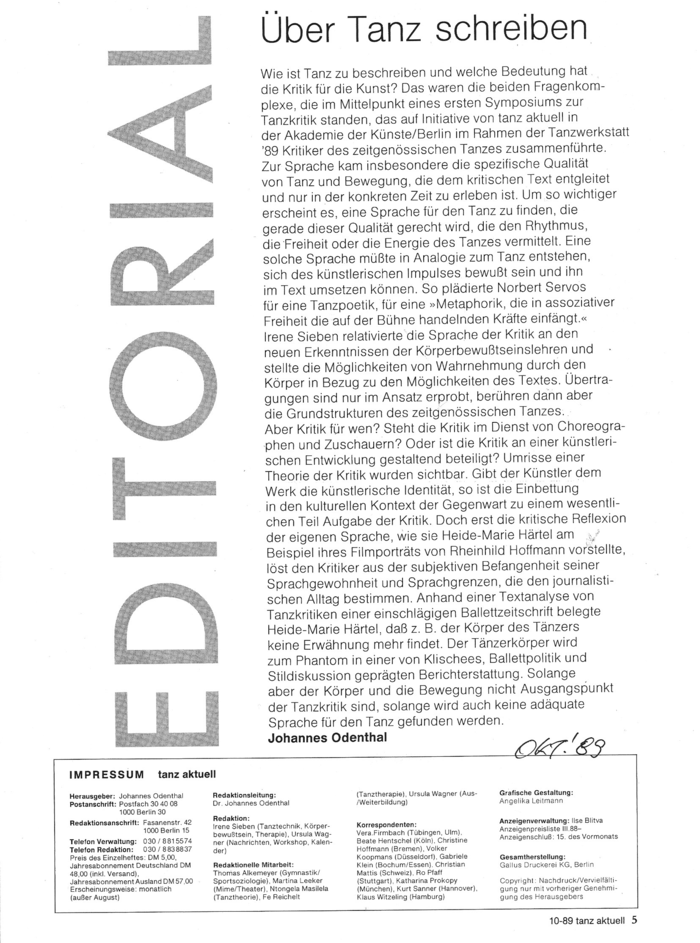 Six years later, the subject of dance criticism was once again a focus for TanzWerkstatt Berlin, but this time as a workshop: 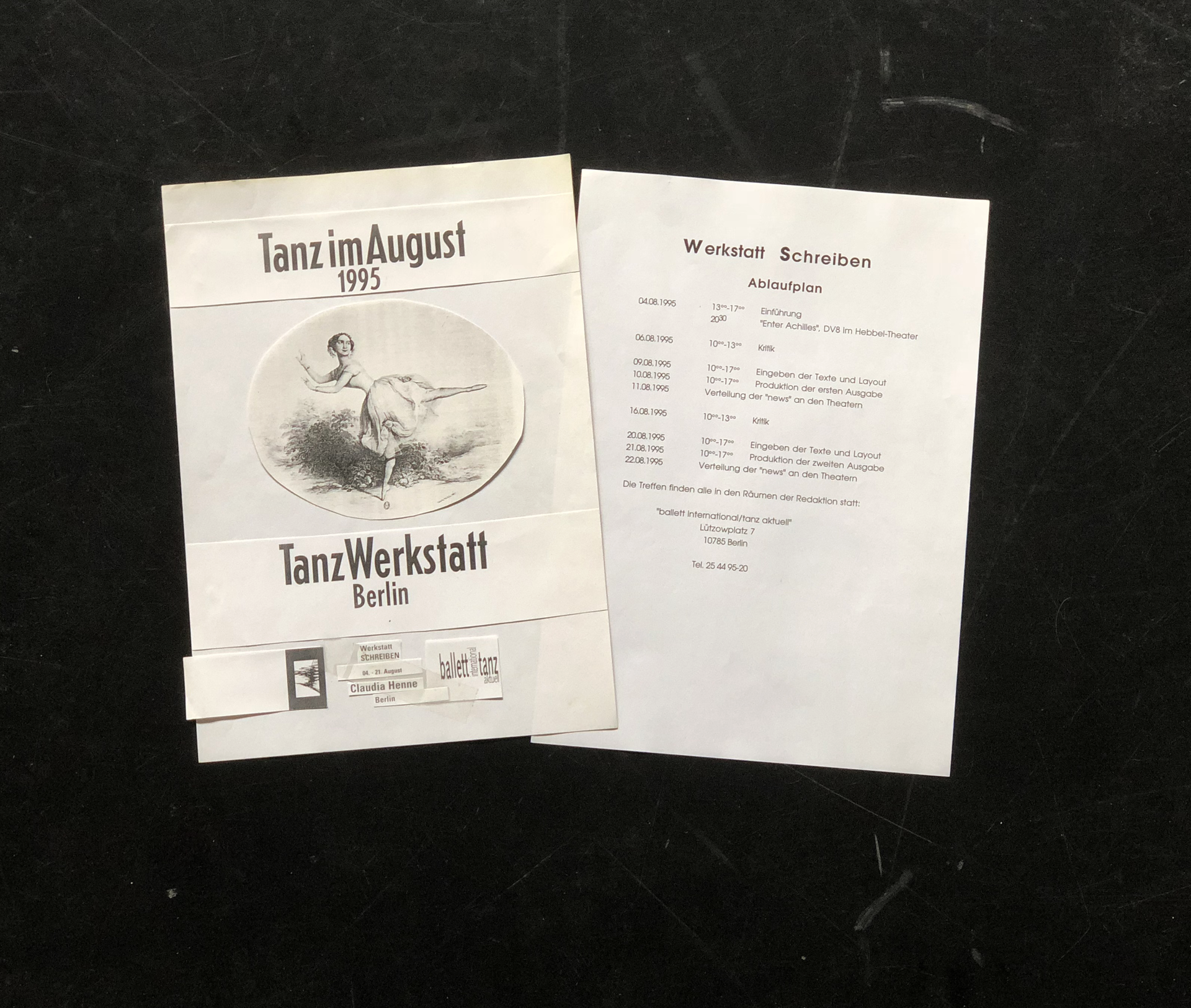 In order to attune them to the workshop’s theme, participants were given an array of historical texts: 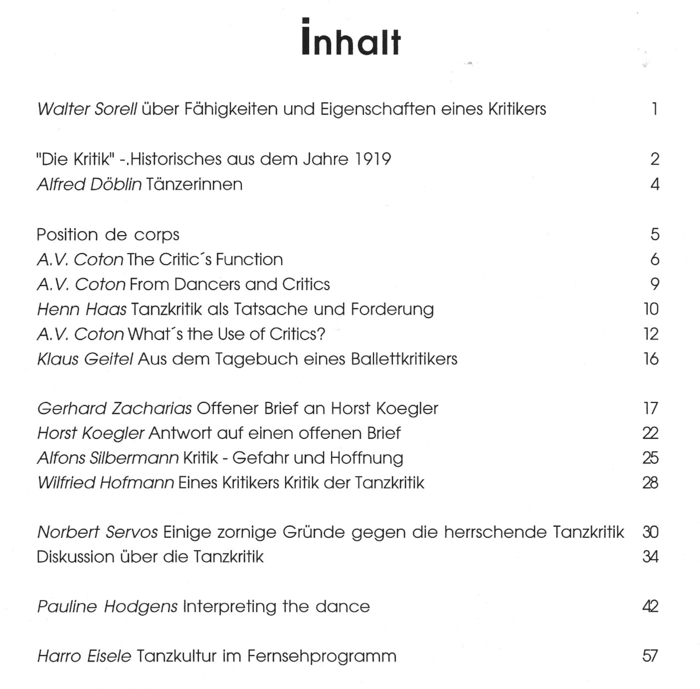 In a 1949 edition of the magazine Theater der Zeit, dancer Henn Haas – who founded the Theater des Tanzes in Weimar in 1945, which was closed five years later – demanded that the first requirement of dance criticism be “clarity of speech and the formulation of expression and judgement. What is said must be clear and understandable from both sides. We dancers must feel understood and the reader must be able to understand what they read without needing a great deal of prior knowledge.” Criticism should be based on four principles: “one’s own experience, acquired knowledge, respect for the task at hand, and a love of the art of dance borne of an innate affinity and empathy with it.”

British ballet critic A.V. Coton had a clear opinion on the position of dance criticism, which he presented to the music section of The Critics’ Circle in London on 22 February 1950:

“It is, I am sure, unnecessary to mention that our greatest asset is our acceptance of the idea that there should always be a state of ‘cold war’ between artists and critics; for private friendships can undermine the very qualities which make our critisicm a worthwhile activity for each one of us...as I said before, it is our business to understand them even when they don’t understand themselves.”

In the seventh edition of Das Tanzarchivin December 1963, Wilfried Hofmann reported on a survey he had carried out on 194 dancers across Germany. He was astounded by the number of dancers who read dance criticism, and how many were unsatisfied by what they read.

“The press must finally concede that a music critic is no better equipped to judge dance than a gymnastics teacher or an architect. Therefore, they must try to attract their own freelance dance critics, who must be allowed to discuss alternate casts, because we can only learn through through comparison. The press must also provide dance reviews with sufficient space, because it is a tremendously difficult job to provide substantive constructive critique without compromising the overall judgement of a performance due to a lack of ‘balance’. The fundamental prerequisite for all of this is ultimately that our press resolve to permit dance reviews to communicate in a language which moves beyond that found in a children’s book.”

Critics should step up to the barre themselves, take part in a pas de deux training session, follow developments in German and international ballet – that should all be part of the job, according to Hofmann.

Experiencing a mixture of clear communication, controversial perspectives, personal experience at the barre and the practical tests in the performances of Lucinda Childs, Meg Stuart, and Susanne Linke/Urs Dietrich, the participants learnt to move their bodies and write their first reviews. The two editions of the festival newspaper were published on 11 and 22 August 1995, which were produced in collaboration with ballet international/tanz aktuell magazine.

“For the first time, the festival will be accompanied by a blog. At tanzimaugust-blog.de, four young cultural journalists will be writing about the programme on a daily basis – a festival medium that looks both outward and inward, a central hub in the festival’s network. All bases will be covered, with reviews of productions from the programme, interviews with key figures and explorations of central themes, along with essays, festival fragments and individual investigations. The authors will be guided by experienced international cultural journalists, who in their position as mentors will assist not only in the editorial work but also help broach the various forms and functions of dance journalism. The blog will operate as part of the festival’s activities and be produced in editorial offices located directly next to the performance venues. The project will take place in cooperation with Berliner Tagesspiegel and tanz magazine.”

Since 2013, the blog has been published as a section of the festival’s website.

The appointment of Virve Sutinen to the position of artistic director in 2014 saw the first publication of Magazin im August. “Born out of curiosity and of love for both dance and writing, it offers interviews and features to introduce the exciting artists coming to Berlin in August. In fact, the magazine is inspired by artists and their thoughts – from all over the world.” The varied and engaging magazine functions as both a programme guide and dance magazine – a playground for dance journalists that goes beyond direct reportage.

With every edition of the festival, dance criticism, critics, and the struggle for daily survival remain running concerns – a situation likely to continue after the festival opening, over beers in WAU. 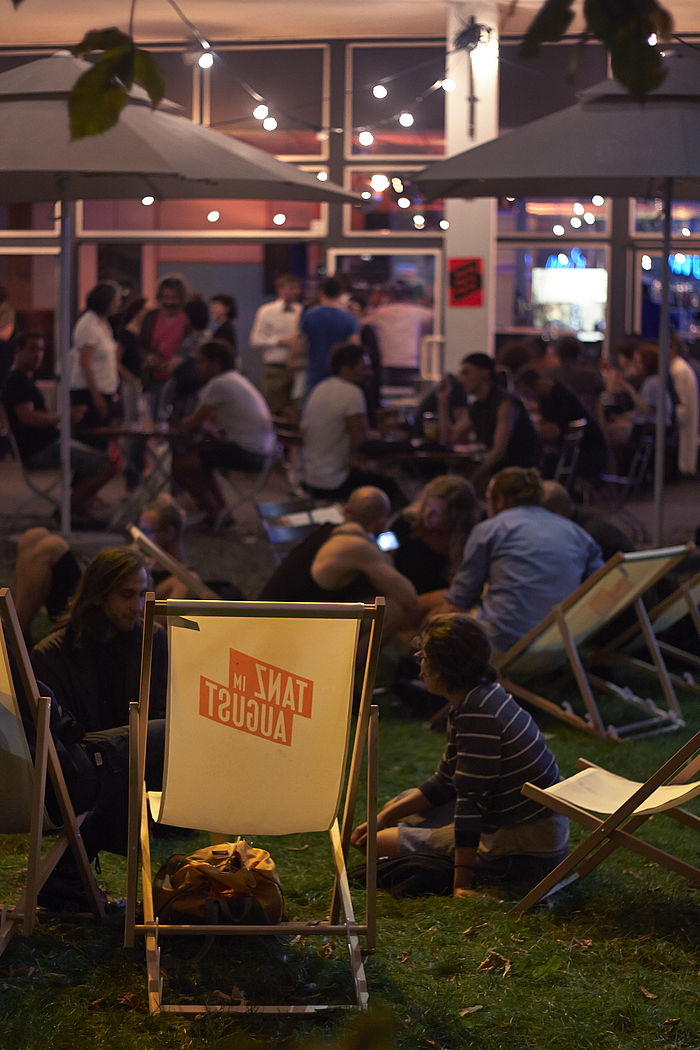